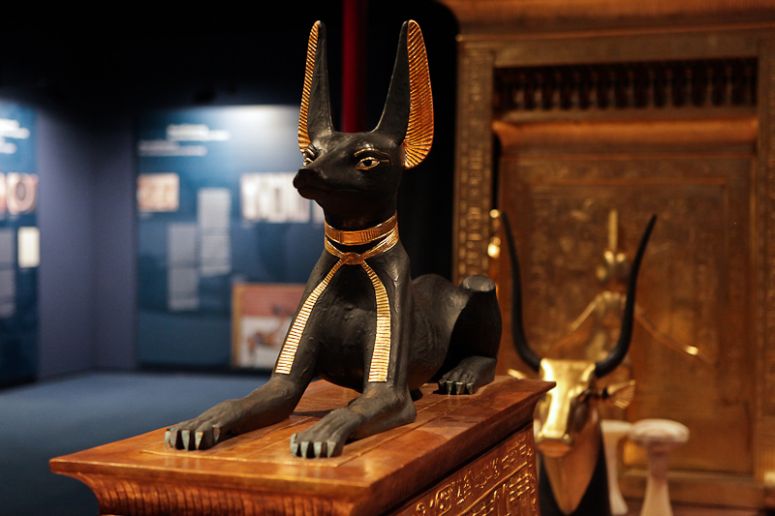 Ancient Egyptians were connected with nature in many ways. In the physical sense, the lush Nile Valley between two hostile deserts and the rhythm of the Nile with its annual flood contributed greatly to the fertility of the land.

Metaphorically speaking, countless murals in royal palaces and tombs depicted landscapes, gardens, and an array of animals and plants, indicating the natural world was revered by ancient Egyptians.

Hieroglyphic characters explain the natural living environment of Egypt during the time of the pharaohs. When analyzed, Egyptologists notice that many of these hieroglyphs have been taken from nature, such as the sun, flora, fauna, and peoples of the region.

The gods of Egypt ultimately sprang from an intensive observation of the natural environment. Many objects from the tomb of King Tutankhamun link directly to this close bond with nature. The Discovery of King Tut gives visitors a wide-reaching insight into this world. The back of the famous golden throne of the King, for example, is decorated with a lush papyrus plant. This is a reference to the mythical birth of the god Horus in the swamps of the Nile Delta. Horus is a sky god associated with Egyptian kingship who takes the form of a falcon.

Ancient Egyptians believed in resurrection after death. An illustrative example of this renewal of life is seen in the god Osiris. He is depicted as a human-shaped mummy on the north wall of the burial chamber of King Tutankhamun. What is striking is his dark green skin color. Many theorists believe his green skin tone refers to flora that can regenerate in mysterious ways within nature’s lifecycles.

The sun god Ra, much like the sky god Horus, takes the form of a falcon. To achieve immortality, the King intended to transform into Ra; thus winged sun discs—a symbol of this god—are found at the entrances of the gilded shrines that encased the sarcophagi and mummy of Tutankhamun. Jewelry, such as a necklace in the form of falcon wings, was discovered among the objects in the bandages of the King’s mummy.

A particularly intimate bond between the ancient Egyptians and nature is revealed in the King’s cosmetic vessels, which were joyously crafted after natural archetypes. An ibex vessel was used for storing precious anointing oils. A scene is depicted on a cylindrical vessel in which a lion tears at a bull. A further reclining lion adorns the lid. The inscription on its body bears the name of Tutankhamun.

And then there are precious metals. Scientists today consider gold to be one of the most precious and valuable metals on the planet. For ancient Egyptians, it was much more than that. Due to its radiant glow, gold was thought to have the ability to light the underworld, explaining why so many objects from Tutankhamun’s burial treasure were coated in gold leaf.

As you can see, ancient Egyptians considered both the natural and supernatural worlds to be of utmost importance in their beliefs and culture.

The Discovery of King Tut recreates the moment of Howard Carter’s remarkable finding of the lost tomb of Tutankhamun. Utilizing more than 1,000 reproductions of the treasures discovered in the undisturbed tomb, the exhibition provides an unparalleled presentation not only of Carter’s experience of entering the burial chamber for the first time, but also of 18th dynasty Egyptian history. The objects, beautifully and scientifically reproduced by leading Egyptian artisans, provide the opportunity to experience the splendor of King Tutankhamun’s tomb without compromising the fragile originals, most of which are no longer permitted to be toured.

For more information and to purchase tickets, click here. This exhibition is on view through April 26.