A Year of Botanical Discovery in Baja California Sur 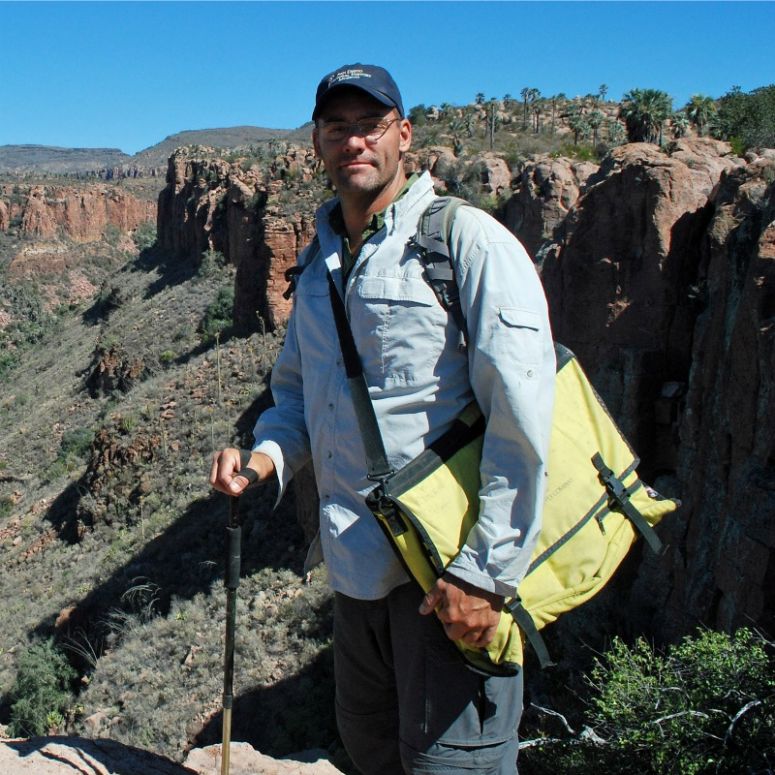 Dr. Jon Rebman, Museum curator and the Mary & Dallas Clark Endowed Chair of Botany, spent 10 months in La Paz, Baja California Sur as part of a work assignment in 2015 and 2016. While in La Paz, he increased binational collaboration with Mexican scientists and students, conducted extensive botanical research in the southern part of the Baja California peninsula, and wrote a new bilingual, plant field guide for the Cape region.

The Museum focuses on the evolution and diversity of Southern California and the peninsula of Baja California. This means approximately two-thirds of our mission region lies in Mexico, and half of that area is the state of Baja California Sur, with La Paz being the capital and scientific hub.

Not only did Rebman’s scientific endeavor coincide with current efforts in the region—such as ongoing research in the Sierra Cacachilas, which was the site of our most recent multidisciplinary expedition—but his research aligned with ongoing friendships and research collaborations at Centro de Investigaciones Biológicas del Noroeste (CIBNOR).

Additionally, the San Diego Herbarium (our botanical specimen collection at the Museum) will greatly benefit from better scientific specimen representation from BCS, allowing us to develop more thorough species coverage and documentation of our entire mission region. Coincidentally, it was a very rainy year in La Paz—this is GREAT for botanists! More water, more plants.

Most of Rebman’s activities can be categorized into four major groups: research, conservation, education, and collaboration.

As a result of over 20 years of floristic research on the Baja California peninsula and adjacent islands, Rebman and co-authors completed the first annotated checklist of the vascular plants of Baja California which will be published as part of our own scientific journal The Proceedings of the San Diego Society of Natural History. Due to the extensive field and herbarium research required to compile this publication, it was revealed that more than 100 plant species in Baja California Sur are known from only one, or very few, historic voucher specimens so little is known about them.

One of Rebman’s major goals while in the region was to attempt to relocate some of these very rare species, evaluate whether they are extinct/extirpated, assess the population sizes and local threats, and document them with photos and herbarium specimens to improve our scientific knowledge of these very rare biological resources. Rebman and colleagues re-discovered about 50 of these “lost” plant species, including extremely rare, endemic plant species that have not been seen or collected in more than 100 years.

Rebman was involved with community outreach, leading various plant nature walks and giving public presentations in Todos Santos, La Ventana, and the city of La Paz. Dr. Rebman’s plant photography is also being used to finish a new, bilingual field guide for the plants found in the Cape region of Baja California Sur. This book will contain approximately 400 of the most common plants found in the region between La Paz and Cabo San Lucas.

One of the first collaborative endeavors Rebman completed soon after arriving in La Paz was a conservation project to create a specimen-based floristic list for the proposed Reserva de la Biosfera Sierras La Giganta y Guadalupe. At the request of the National Commission on Natural Protected Areas of Mexico (CONANP), he compiled a plant list for this area that will likely be used to help substantiate the need for and importance of this proposed reserve.

The majority of Rebman’s scientific collaboration was with botanists from CIBNOR. Mexican botanists from this institution participated side-by-side in almost every botanical expedition in which Rebman was involved. As a result, joint scientific research projects and publications are abounding. Furthermore, Rebman worked to improve regional botanical resources by assisting with curatorial practices at the HCIB Herbarium located at CIBNOR, including the study and annotation of herbarium specimens and updating botanical nomenclature in the collection.

Rebman’s work in La Paz has significantly improved the Museum’s reputation as a leading regional institution for natural history science and education and has helped to achieve some of our core mission goals by fostering binational collaboration and scientific research in Baja California Sur.